God created you to be you

Throughout history there have been individuals who, by maintaining their integrity and resisting pressures to think and act like those around them, have changed the world for the better.

One such man, Polycarp, lived in ancient Smyrna between 69 and 155 ᴀᴅ. Known for his piety, he helped stabilize the early Christian church and its practices after the death of Jesus’ disciples. He was one of the apostolic fathers to whom Christians turned for guidance in worship and authentication of Christian teachings. His role was paramount in the survival of Christianity during its second century. His mission clearly upset Roman officials, who sought his death. But despite the threats of the Roman Empire, Polycarp refused to renounce his Christian faith and was martyred.

Lynn Jackson is a Christian Science practitioner and teacher. She lives in Lubbock, Texas. 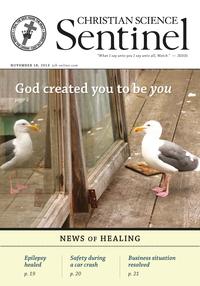