Addiction to alcohol and tobacco overcome

Originally written in Spanish, this testimony was first published in the August 2013 Spanish, French, German, and Portuguese editions of The Herald of Christian Science.

I became acquainted with Christian Science when I was dating the man who later became my husband. He had attended a Christian Science Sunday School when he was a child, so when he saw the challenges I was facing, he gave me a copy of Science and Health with Key to the Scriptures by Mary Baker Eddy.

At that time, I felt great resistance to everything concerning spirituality, and all the arguments I had with my boyfriend were precisely because he was attending church. But one night, trying not to be seen, I took the book, began to read it, and realized how irresistible it was. I couldn’t put it down.

Send a comment to the editors
NEXT IN THIS ISSUE
Testimony of Healing
Vision healed, and a new start 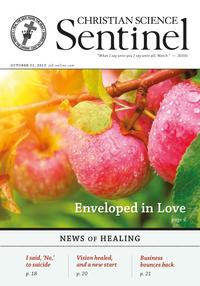