This was originally written in Portuguese and published in the October 2012 edition
of The Herald of Christian Science.

For a long time, I suffered from premenstrual tension symptoms. I often needed to stop my activities and lie down for a while, in order to find relief from acute cramps, headaches, and nausea.

During a conversation I had with a Christian Science practitioner about this condition, she mentioned the fact that I wasn’t a descendant of Eve. In the Glossary of Science and Health with Key to the Scriptures, Mary Baker Eddy defines the word Eve as: “A beginning; mortality; that which does not last forever; a finite belief concerning life, substance, and intelligence in matter; error; the belief that the human race originated materially instead of spiritually,—that man started first from dust, second from a rib, and third from an egg” (p. 585). I realized that the term Eve represents material concepts of everything related to womanhood, including the belief that a woman is susceptible to monthly suffering because of the fact that her body goes through a cycle to be ready for pregnancy.

Send a comment to the editors
NEXT IN THIS ISSUE
From the Editors
Divine simplicity...or mental algebra? 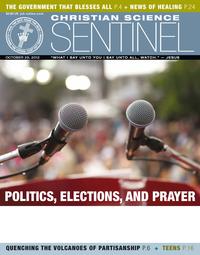