Take a stand with moral courage

Lately, as I’ve been looking at various situations in the world and in my own country, I’ve been thinking about courage—specifically, moral courage. This is the type of courage that remains undisturbed and helps us to be steadfast in the face of adversity. Unlike animal courage, which lashes out in fear and sometimes violence, moral courage enables us to address problems with persistence and an inner peace. Individuals and leaders of nations throughout the world are in need of moral courage to make choices that will benefit all.

I had an experience recently on a small scale that gave me a better understanding of moral courage. I was working with a group of people on a project. One of the individuals had a very strong personality and seemed to be forcing her ideas on everyone else. This bothered me, and at one point I spoke up in a way that exhibited animal courage.

Martha Sarvis is a Christian Science practitioner who lives in Boerne, Texas. 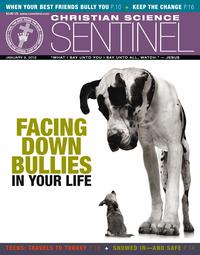