This past Easter Sunday my husband and I were in Boston, and we attended The Mother Church. The whole service inspired me, but what intrigued me was a phrase in the solo: “Arise from self-made sepulchers!” (The words of the solo were adapted from a poem by Max Dunaway called “Easter Day.”)

That weekend I had been dealing with all the symptoms of a cold, so I asked myself, “What kind of beliefs are keeping me in a self-made sepulcher?” Well, I thought, “How about the health law that calls itself contagion? And what about the law that says I have to suffer for travelling from a warmer climate to a colder one? And the belief that says I’m going to suffer a certain number of days before this cold disappears?” I had also been condemning myself for not bringing along warmer clothing, and for feeling resentful toward the manager of the bed-and-breakfast where we had stayed who said he could only raise the heat “a little.” So I had plenty of work to do to redeem and resurrect my thinking before I could emerge from a self-made sepulcher. 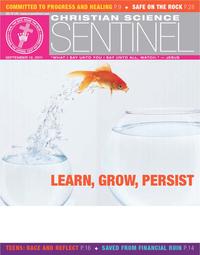