About four and a half years ago a growth appeared on my body. It started very small and grew at a minuscule rate. Because of this and its location in an inconspicuous place, my urgency in seeking healing wasn’t as imperative as it should have been, although I did pray about it from its initial appearance.

During the next several years, the growth gradually enlarged and took on an unsightly appearance. Although I thought about many truths taught in the Bible and Science and Health with Key to the Scriptures, by Mary Baker Eddy, I eventually realized that a more consecrated and focused approach was necessary. 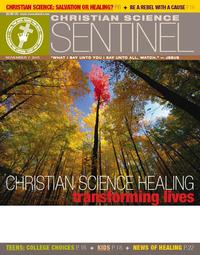