An in-depth examination of early Genesis

Before writing Science and Health, Mary Baker Eddy “made copious notes of Scriptural exposition, which have never been published” (Science and Health, p. ix), as she recounts in the preface to the book. Biographer Robert Peel notes that “the manuscript on which she was probably working at that time was composed of rough notes for the first volume of a projected work of enormous scope, to be called ‘The Bible in its Spiritual Meaning.’ Volume One was entitled ‘Genesis’ ” (Mary Baker Eddy: The Years of Discovery, p. 204). Although she dropped her plan for a multi-volume exposition, Mrs. Eddy’s efforts culminated in a spiritual exegesis of part of Genesis that is chapter XV of Science and Health. In this week’s Bible Lesson, titled “Adam and Fallen Man,” almost half of the correlative passages are from that seminal chapter.

The episodic structure of the Bible passages in this Lesson lends itself to in-depth examination of the early part of Genesis. Nine of the ten sections are centered on that book. However, related passages from other books of the Bible accompany the Genesis texts, throwing additional light on their claims. For example, in Section II, before the narrative of the creation of mankind from “the dust of the ground” (Gen. 2:7, citation 4), we have this from Ecclesiastes: “Lo, this only have I found, that God hath made man upright; but they have sought out many inventions” (7:29, cit. 3). The New Revised Standard Version translates it this way: “See, this alone I found, that God made human beings straightforward, but they have devised many schemes.” 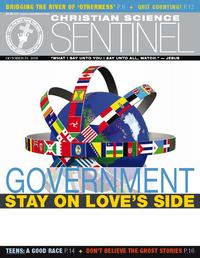