PRAYER THAT COUNTERS A MOB MENTALITY

ON A RECENT WEEKEND, a flash mob of several hundred young people assembled suddenly in a lovely shopping and entertainment district of my city. A flash mob by definition is not necessarily a bad thing. It is generally associated with gatherings organized via a virtual community (e-mails or social media)—"the Net made flesh," as one person calls it. But in this case, the crowd got out of control, fights broke out, unwary passersby were intimidated, some were attacked, and the situation ended badly.

The term "mob mentality" is not new, nor is it limited to young people. It describes how behavior can change when large groups congregate at sports events, political rallies, or other major venues. Often, individuals find themselves going along with conduct they would never condone or take part in if they were acting alone.

Devon LaMaster is a practitioner and teacher of Christian Science in Mission Hills, Kansas. 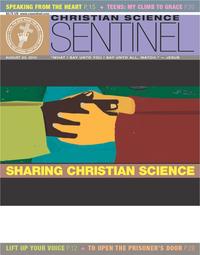