THE EVIDENCE IS DAUNTING. Experts say that the US faced an "electronic Pearl Harbor" in 2007, when unknown hackers broke into a number of highly sensitive federal agencies and successfully downloaded roughly the equivalent of the Library of Congress (12 terabytes). According to security firm McAfee's 2007 annual report, 120 countries are actively engaged in developing ways to use the Internet as a weapon. High-profile attacks by the Chinese against private companies like Google have compromised the security of one of the biggest information systems in the world, on which many economic, political, and social transactions depend. These cyberwarriors appear to have all the advantages, including stealth, anonymity, and unpredictability.

Sounds scary, doesn't it? And it would be, if we were really helpless. But prayer is an active force in the world, one that can bring to light evildoing before it can actually do harm. Prayer also makes people alert to new ideas, such as innovative ways to protect Internet systems. When we align our thoughts about ourselves and others with the one divine Mind, God, we can expect harmony of purpose and action to result.

Maya Dietz's last overseas tour as a diplomat was as US Consulate's Information Security Officer in Melbourne, Australia. She is now studying for a PhD in public policy. 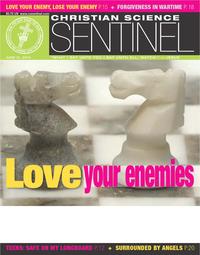