ALL OVER THE WORLD —in individual households, businesses, governments, and every other kind of institution—the lingering effects of a recessive economy have people wringing their hands, scratching their heads, and vigorously debating the question, "What is the best way to restore and sustain a truly healthy economy?"

The British government, for one, has set itself on a course of drastic cuts in spending in order to live within its means, so to speak. Some praise this course, "while others warn that the cuts could tip the UK's fragile economy back into recession" (CSMonitor.com, "Britain's budget cuts outline radical path toward smaller government," October 20, 2010). And the debate goes on.

Barbara Vining is a practitioner and teacher of Christian Science who lives in Perrysburg, Ohio. 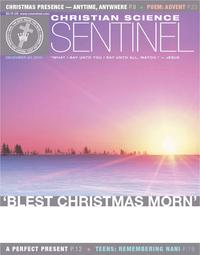