On a windsurfing trip several months ago to the Caribbean island of Bonaire, I was putting my daughter's equipment away and didn't notice that someone had placed their windsurfing board close to where I was working. The board was resting upside down on the sand with the fin pointing straight up. After thoroughly rinsing my daughter's board and letting it dry in the sun, I turned to put it inside a storage bag. While trying to slide the board in the bag, I stumbled and my foot came down on the fin of the other board. When I looked to see what had happened, I saw that the fin had made a very deep cut between my toes. It was a scary image.

My first thought was anger toward the person who'd left their board lying fin-up (most windsurfers consider this practice unsafe for just this reason). At the same instant I became fearful, not only that my windsurfing vacation had prematurely ended—we still had a week before we headed home—but that my foot would become infected. I briefly considered going to a hospital to get stitches in my foot, but I felt strongly that the medical facilities were not where I wanted to go. 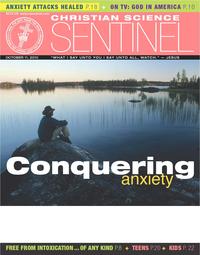