Our biweekly series on how people have nurtured their public practice of Christian Science healing.

A WITNESS OF GOD'S POWER

Although my parents had raised me in this religion, I drifted away from it when I went away to college. I became involved in medical practices and eventually took up nursing work at a local hospital. While there, I enjoyed being a source of support to patients, especially those who were fearful, and I found myself sharing my sense of God as Love with anyone who was receptive. I remember in particular one man who was very frightened about the way he was feeling following surgery, and I spoke with him briefly about God knowing him and loving him through every trial. I assured him he was all right, as I was convinced that fear was the only thing holding him back. I just knew in my heart he was OK. The next day when I went to work, I was told the patient had gone home the evening before without any more of the disturbing symptoms. I knew he had been touched by the Christ. 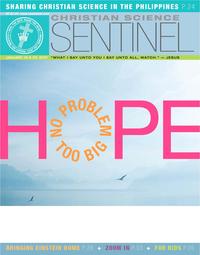