Prayer for a 21st-century United Nations

More than 100,000 troops and personnel of the United Nations Peacekeeping Operations are deployed in the Democratic Republic of Congo, Cyprus, the Middle East, Darfur, and elsewhere as part of the UN's contribution to world peace. Founded at the end of World War II by 51 nations seeking to create a forum to foster international dialogue, peace, and progress, the UN currently has 192 members who meet regularly in both New York City in the United States and in Geneva, Switzerland.

Like many institutions, the UN is facing change. There are those who feel the organizational structure adopted in the 1950s isn't doing such a good job of meeting 21st-century demands. More developed countries want a place at the Security Council table, where major decisions are made. Factionalism has sprung up. The Western World, Third World, Asian block, Muslim block, and otherwise unaligned countries all may have different agendas in any given debate.

Anthony Whitehouse is a Christian Science practitioner in Coppet, Switzerland. 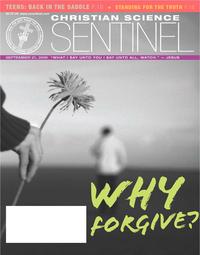