TO BE A WITNESS FOR PEACE

I'M WRITING THIS with a green band on my wrist, which I've worn in solidarity with thousands of Iranian people who are wearing them to protest the outcome of their presidential election. While the streets of the major Iranian cities have quieted down, reports The Christian Science Monitor, "the country's current crackdown against citizens angry at the apparent rigging of the June 12 presidential election in favor of the incumbent, Mahmoud Ahmadinejad, is its broadest since the aftermath of the Islamic revolution in 1979" ("Iran's mass arrests: Broadcast since 1979 Islamic revolution," June 28, 2009). Hundreds of student protesters, academics, journalists, and political activists are being held in detention centers around the country.

Every time I notice my green wrist band, I stop for a moment to pray for peace in Iran. My prayer affirms the wonderful spiritual reality that peace is already there. Does that sound like I'm wearing rose-colored glasses? Well, it's not actually out of touch with reality as God knows it, and here's why.

Maryl Walters is a practitioner and teacher of Christian Science in St. Louis, Mossouri. 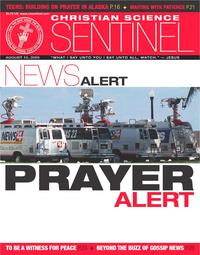