Summer was approaching, and the familiar thought came, "Oh no, now I have to deal with the discomfort of chaffing thighs again!" When I was doing a lot of walking in light clothing, I would experience soreness and sometimes even a rash on my legs. It didn't concern me that I was no longer slim and lithe as I'd been as a young woman—I was just a little more "substantial" than in my early years, I reasoned. But this discomfort was unacceptable, and it became clear that adjustment was needed.

So I resolved to deal with this properly, which to me meant through prayer. In fact, as I began to pray about it, I was reminded of an instance from many years prior that had strengthened my commitment to Christian Science healing. 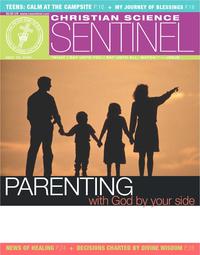