Some call it the first genocide of the 21st century. After six years, little has been done to stem the tide of killings and rapes, or to prevent the innocent from being forced out of their homes. Despite the nearly 20 resolutions that have been passed in the United Nations, Darfur activists point out that there has been little or no enforcement. While world leaders have deliberated, nearly 300,000 people have been killed and more than 2.5 million left homeless, not to mention the scores of children sold as soldiers and sex slaves.

The Christian Science Monitor, this magazine's sister publication, recently ran an opinion piece by Ana Uzelac, who assessed that "the only stability under [President Omar al-] Basir that Sudan has known is the one of repression, recurring armed conflict, and mass murder" ("First justice, then peace in Sudan," October 20, 2008). That the Darfuri people feel abandoned and question if the most recent initiatives will go unheeded should come as no surprise.

Contributing editor Colleen Douglass is a teacher and practitioner of Christian Science in Los Angeles, California. 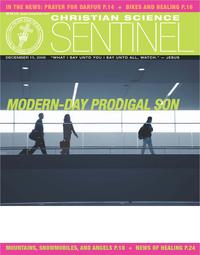