On afternoon last spring, Tiger took 44 shots for nine holes in a major tournament. The following week on a windy day and on another difficult course, he shot a 66 for 18 holes. On being asked about the difference, Tiger said he'd found a new freedom in swinging the putter through the ball, thus experiencing no sense of restriction.

Brian Kissock was twice national amateur golf champion in his native country of Northern Ireland. He is now a Christian Science practitioner and prison chaplain living in San Diego, California.

Send a comment to the editors
NEXT IN THIS ISSUE
IN THE CHRISTIAN SCIENCE BIBLE LESSON
SING A NEW SONG! 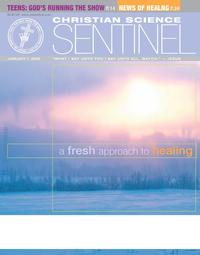