I had to go through the most painful transition in my life during the month of August. Because of that, I was not able to read the Sentinel of August 27 on "Life's transitions" until two weeks later.

I have particularly been impressed and healed by the article "When a transition isn't the one you wanted" by Channing Walker. This article calmed me down and reassured me of the fact that when I've undergone difficult times in the past, God's love has seen me through. I was reminded that God's plans for me are to build me up, not to uproot me; to give me a future and a hope. 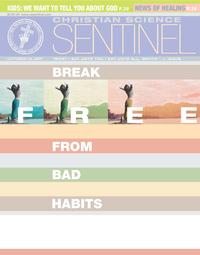