BE THE BLESSING YOU WANT

It's not a riddle. But it is a testament to the way language has evolved over time.

Consider the nearly two centuries' old definition of the word imposition, as found in Webster's 1828 dictionary: "the act of laying on, the laying on of hands especially as an act of blessing." Today, though, we use imposition if we want to communicate the idea that something is an unwelcome burden, an infliction, or an intrusion. No act of blessing there! 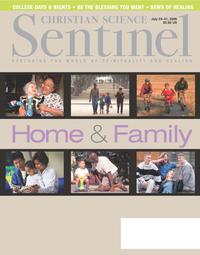