LET LOVE WORK, ONE THOUGHT AT A TIME

ONE DAY LAST SPRING, I was backing out of a parking space more slowly than usual, because the car I was driving felt somewhat unfamiliar after three months behind the wheel of a different car. A man in a sedan grew impatient, leaned on the horn, rolled down the window, turned the air blue with a blast of obscenities, then roared on past. Apparently, he considered my wasting 20 seconds of his valuable time a serious offense. For my part, I considered his boorish behavior an even greater offense. So, as he drove off—believe it or not!—I started to follow him.

Growing angrier by the moment, I rehearsed the tongue-lashing he so richly deserved. Soon he pulled into a driveway, and I actually considered stopping, getting out, and telling him in very crisp terms how offensive and immature his behavior was to me. Fortunately for both of us, I thought better of the idea and just kept on driving.

Elaine Follis is a contributing editor. She is Todd Professor of Religious Studies at Principia College in Elsah, Illinois. 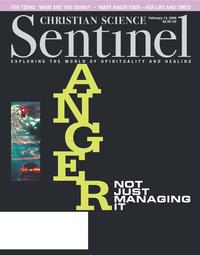