BORROWER SERVANT TO THE LENDER?

The pithy book of Proverbs in the Bible states flatly, "The rich ruleth over the poor, and the borrower is servant to the lender" (22:7). Is there counsel in this statement—particularly the latter half—that might help us escape the folly of excessive personal indebtedness? Perhaps an even more important question is: How can we pray to help the United States government face up to its growing national debt? So many countries are affected by the economic condition of the United States that this is an area of international concern.

In the March 19 issue of The New York Times Alan Brinkley reviewed the book American Theocracy by Kevin Phillips. Mr. Brinkley noted that the book points out "the astonishing levels of debt—current and prospective—that both the government and the American people have been heedlessly accumulating." In addition to debt at the federal, state, and local levels, corporate debt is also growing. International trade imbalances are another factor, and individual consumer debt is exploding. The review concludes, "... Phillips has created a harrowing picture of national danger that no American reader will welcome, but that none should ignore."

Contributing editor Bea Roegge is a practitioner and teacher of Christian Science in Chicago, Illinois. 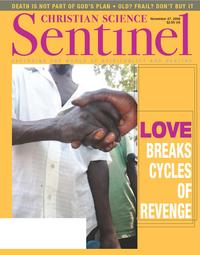