My music school was planning a full-length opera production with orchestra—Mozart's Die Zauberflote (The Magic Flute)— and following an audition, I was selected to sing the wonderful role of First Lady. All I could think about when the spring semester commenced in late January was diction, voice technique, and character study. I wanted to be well prepared.

A few weeks into rehearsals, though, I wasn't singing with the ease I was used to. With added determination, I labored on, but by early March, I had no voice. I needed a note from a medical practitioner to excuse me from singing at rehearsals. After undergoing an uncomfortable exam procedure, the doctor diagnosed a bruise on my vocal chords. This kind and gentle man said there was nothing he could prescribe to heal this condition except for steroids, which he said he wouldn't recommend. He told me I couldn't sing, or speak, for two months and scheduled a follow-up visit in a few weeks. 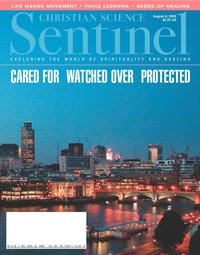