RAPID RESPONSE INSTEAD OF REACTION

All right, I admit it: I stopped my office work for a while a few weeks ago to watch a "thriller" of a verdict being handed down in the Michael Jackson court case. Those who could not take time out of their daily routines, however, were treated to the widest imaginable media coverage and commentary for days thereafter.

Then, another drama captured the headlines. A Boy Scout, hiking in Utah, was reported missing. That story gave rise to yet a new wave of media attention, with sound bites offered up every hour of the day. Eventually, that story also was resolved. The boy was found safe and well.

Elaine Follis is a contributing editor. She is Todd Professor of Religious Studies at Principia College in Elsah, lllinois. 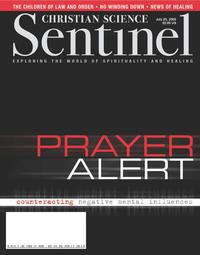