For more than 20 years I had an enormous battle with a stomach ailment that didn't respond to medical treatment. I could eat very few things, and even those I ate with a certain amount of fear. Many foods were harmful to me. Every time I saw other people eat with such pleasure and enjoyment, I was very sad because I didn't have the freedom they had.

It wasn't until I learned about Christian Science and began studying it, that I got a clearer understanding of God as the Creator of all, and of His creation as spiritual. 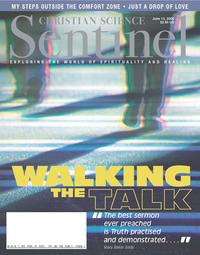