I WAS RAISED in the United Church of Canada, the country's largest Protestant denomination. As a child, I loved Sunday School. But as a teenager, I began to see a lot of hypocrisy in organized religion. So for about a decade, I was a defiant agnostic.

Happily, God's feelings weren't hurt by this. In fact, eventually, through divine grace, spirituality became more important to me than anything else. After attending services in what are known as Christian Science branch churches for three years, I became a member of The Mother Church, The First Church of Christ, Scientist.

Lyle Young is a Christian Science practitioner and teacher. He lives in Boston. 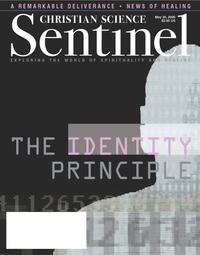