PEACE AND THE POPE

AS ONE OF EARTH'S tireless pilgrims, Pope John Paul II rightly will be remembered for going where the world's people live and worship—circling the globe in his travels; embracing a spiritually burgeoning Southern Hemisphere; and in heartfelt openness, reaching out to fellow Christians, Jews, Muslims, and many other faith families.

The Christian Science Monitor's founder, Mary Baker Eddy, could have been writing about John Paul II when she paid tribute to Pope Leo XIII in 1903: "The intellectual, moral, and religious energy of this illustrious pontiff have animated the Church of Rome for one quarter of a century. ... I sympathize with those who mourn, but rejoice in knowing our dear Godcomforts such with the blessed assurance that life is not lost; its influence remains in the minds of men, and divine Love holds its substance safe in the certainty of immortality" (The First Church of Christ, Scientist, and Miscellany, pp. 294–295). 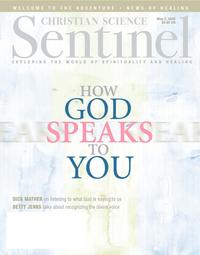