"THE MAJORITY OF AMERICAN TEENS believe in God and worship in coventional congregations, but their religious knowledge is remarkably shallow and they have a tough time expressing the difference that faith makes in their lives, a new survey says. Still, the notably comprehensive National Study of Youth and Religion concluded that 'religion really does matter' to teens.

"The research found that devout teens hold more traditional sexual and other values than their nenreligious counterparts and are better off in emotional health, academic success, community involvement, concern for others, trust of adults, and avoidance of risky behavior.

Send a comment to the editors
NEXT IN THIS ISSUE
Article
Where does integrity come from? 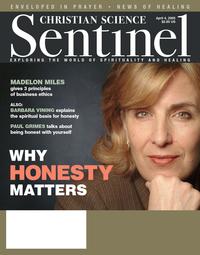