'I AM YOUR NEIGHBOR'

MY FAVORITE PEN will never go on an airplane with me. The top barrel, made of shiny clear red plastic, contains a metal file, a tiny pair of scissors, and a knife. It's beautifully made, has a wonderful weight to it, and is just plain jazzy. But it's my favorite pen for other reasons.

Right around this time last year, we moved to a small apartment while some major work was being done on our home. Because moving day was also the coldest day of the year, problems arose that delayed the move, and the landlady became angry—very angry. Apologies were of no avail. During the first week of settling in, the anger accelerated to hatred, and she threatened to evict us. One morning after calling to ask her permission to let the phone man in, I realized I was trembling. That's when it hit me: No matter how short-term the lease, this needed resolution. 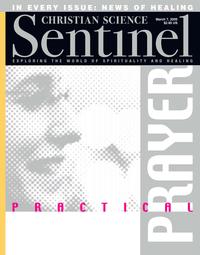