can you stop feeling vulnerable?

A FRIEND OF MINE got off the bus one dark night and started walking the five or six blocks to her home. It was a suburban area, and no one was around. Shortly after the bus pulled away, she became aware that someone was following her. If she speeded up, he did too. If she slowed her pace, he did too. She was frightened. As she walked, her fear increased. Did he want money? Was he armed? Was he high on drugs? The fear mounted with every step. She felt helpless. She certainly had no way to defend herself. Then she decided she could take the fear no more. She was going to confront whoever it was. Whatever was going to happen, she wanted to get it over with. So gathering up all her courage, she turned around to face the enemy.

As it turned out, there was no enemy. He was a young teenager who lived near her. It was so dark that he was afraid. He recognized her and knew that if he could keep her in his sights, he'd be safe! They walked on together chatting happily.

David Degler is a Christian Science practitioner and teacher living near Nashville, Tennessee. 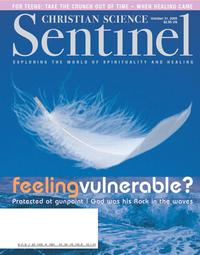