'I was certain I would be healed'

I have always been an avid student of the Bible. I was raised in a Protestant religion and tried to follow Christ's teachings as best as I understood them.

During a difficult period in my life, a time of great sadness, a school friend I hadn't seen in many years told me about healings she had obtained through the study of Christian Science. She gave me some copies of Le Héraut de la Christian Science to read. 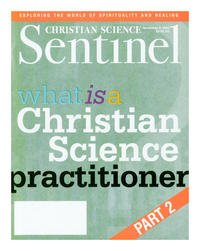