The "Green pastures" part of the 23rd Psalm had been central to my prayer before beginning a few days in what John Muir named The Range of Light—The Sierra Nevada. These are much beloved peaks and valleys, rocks, glaciers, lakes, meadows, and to return was restoring beyond measure.

The beauty of that psalm remained at the heart of my prayer during those several days. "The Lord is my shepherd; I shall not want. He maketh me to lie down in green pastures: he leadeth me beside the still waters." These verses nurtured my thoughts and love of these Alpine days, and at first I didn't want to go farther into the verses that describe the "valley of the shadow of death." I knew that the psalm assures God's care even though walking there, but I just didn't want to think that there could even be such a valley and such a shadow.

John Selover is manager of The Christian Science Publishing Society. 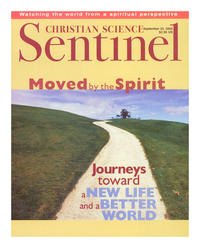