When I was in Navy boot camp, I began to realize that I needed something more to rely on than just my own human abilities. I had sometimes gone to a Christian Science Sunday School when I was growing up, and I decided to attend church services that were held every Sunday at the Great Lakes Naval Training Center in Illinois. The Christian Science chaplain on the base helped me get back into studying Christian Science.

One Friday in late 2000, toward the end of boot camp, something happened that, to me, reinforced the need to more completely understand my relationship with God. Severe pain developed in my lower body. I was sent to the base hospital, where several Navy doctors conducted a series of tests. They determined that I had a hernia and told me that I would have to have an operation, which they would schedule for the following Wednesday. They said I should come back Monday morning for some additional tests and pre-op work. 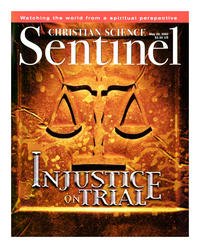