This short message to Czar Nicholas II of Russia, written by Mary Baker Eddy in 1898, was probably drafted in response to an interesting item on the front page of the second issue of the Christian Science Weekly (which several months later would be renamed the Christian Science Sentinel). Under "Current Events," it was noted that Nicholas had asked his foreign minister "to hand to the foreign diplomats in St. Petersburg a note" that stated in part that "the maintenance of general peace and the possible reduction of the excessive armaments which weigh upon all nations, present themselves in existing conditions to the whole world as an idea toward which the endeavors of all governments should be directed." (History shows that Nicholas truly wanted peace, but by 1905 was pressured by political and family relationships to prepare Russia for war.)

"To His Majesty Nicholas II, Czar of all the Russias: 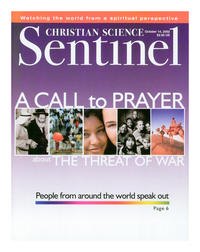