To someone who has lost a loved one

(adapted from a real letter)

There's So Much I want to say that I hope will be helpful. Of course, I know that God is always sending love to you. And I know that you trust that your wife is safe in God's care, just as she has always been. I know you loved her very much, and I believe you've already "released" her.

Restoring myself was difficult after my husband, Bill, died. I was so focused on releasing him that I spent a long time not taking other steps I needed to take. He and I were so compatible that I referred to him as my soulmate. We often had the same ideas at the same time. The pitfall in all that is the concept of being half a person who needs the other half to make you whole. Then, if the other person is gone, you're left with being half a person again. 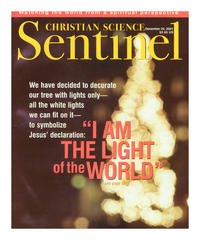