Your part in crowd control

Earlier this summer a mob of men assaulted and sexually molested as many as fifty women in Central Park in New York City. In the aftermath, some people blamed the police, who appeared unresponsive. Others pointed to the influence of music videos and other media that present degrading images of women. Some condemned American culture in general.

A number of people demanded a higher standard of thinking and living. As Bronx borough president Fernando Ferror put it, "we have a responsibility as husbands and fathers and brothers to say, 'Wait a minute, this is not acceptable behavior, this is criminal behavior'" (Joyce Purnick, "Mob's Sexual Rampage in Park Provokes Anguish on 2 Fronts," The New York Times, June 19, 2000). This demand for a higher standard should be easy to identify with. No one wants to live in dread of violence. No one wants mob rule. 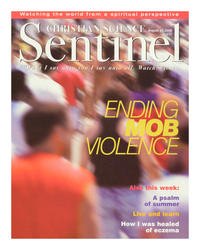