"I Don't know what we are going to do with you!" On the surface my boss's displeasure seemed justified, for I had made a serious mistake in my work. Actually, though, I had followed the instructions I was given. Unfortunately, the person who had misinstructed me chose not to admit responsibility for his error, even though he was present at this discussion. I felt I had no alternative but to remain silent. My career prospects seemed doomed. I was transferred to a routine job in a department from which further promotion was considered unlikely.

I didn't give up hope, though. I knew of many Biblical examples of injustice overcome. For instance, Joseph overcame his brothers' treachery (see Gen., chaps. 37–50), and Christ Jesus conquered the hatred unjustly directed at him (see Matt., chaps. 27 and 28). I also found comfort in another assurance from the Bible: "He is the Rock, his work is perfect: for all his ways are judgement: a God of truth and without iniquity, just and right is he" (Deut. 32:4). 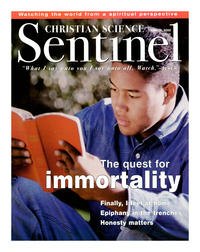