From a sample of more than 990 patients suffering from serious heart conditions, 524 were randomly assigned to a control group. The 466 patients who remained were prayed for daily by five separate volunteers who were not on hospital property. The prayers began one day after the patients were admitted and continued for twenty-eight days. Neither the patients nor their physicians knew that the study was being conducted or that the intercessory prayers were being made.

Send a comment to the editors
NEXT IN THIS ISSUE
Article
Dreaming of something for nothing? 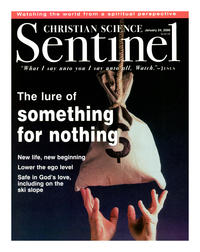