I grew up in a secular household and only went to church or Sunday School when our neighbors invited me. I also grew up in a medically oriented world, where diseases, accidents, and illness were all accepted as part of the normal process of life. My first wife died of cancer, and within a few years cancer had taken both of my parents, also. This was the background that I brought to Christian Science.

My second wife is a lifelong Christian Scientist. At no time during our marriage has she ever proselytized or even mildly pushed me toward Christian Science, but I nevertheless became interested because my parents had both passed on early in their life, even with the best of medical care. I began reading my wife's copy of Science and Health with Key to the Scriptures as a textbook because I liked the logic of Mary Baker Eddy's thinking. Despite my early experiences, I had a very deep belief in the existence of God, and felt that God was not a creator of illness, accident, injury, or death. Mrs. Eddy's explanations relative to God and His man made sense to me. Hers was the only religious book I had read that furnished logical answers to questions previously answered only with "Have faith." 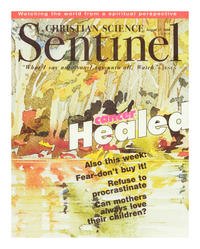