Peacefully resolving conflict: a firsthand experience from the Vietnam War

On April 25 each year, citizens of Australia and New Zealand commemorate ANZAC day—the time in 1915 when a great many members of the army in both nations lost their lives landing on the Turkish beach at Gallipoli. Although that battle is long past, the national holiday remembers the ANZAC tradition of courage, mateship, and sacrifice, and honors veterans of both World Wars and the Vietnam War.

Beyond the usual ceremonies of prayer, wreath-laying, and marches down city streets, this time of remembrance gives people an opportunity to think more deeply about the reconciliation and love that heal conflicts of all kinds. The author, a Christian Scientist who lives in Australia, writes here of lessons she learned while she was part of a group of entertainers in Vietnam during the war. 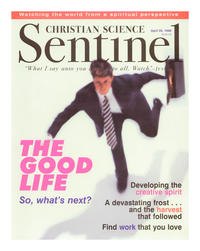