One morning I decided to tackle the paperhanging that needed to be done myself—even though I had never attempted this sort of work on my own before. I made a start, and I thought I was doing quite well until I reached one awkward corner. I considered leaving that part until the next day, when I would not feel so tired—and no doubt that would have been the wisest course. But I continued.

As I worked, I sliced the side of my thumb on the edge of the paper. It was quite a deep wound. By the time I got the bleeding stopped, the piece of wallpaper I had been working with was drying all wrinkled on the wall. At that point my husband, who did not know of my injury, walked in and said, "Look at the wrinkles on that wall!" This was not at all what I had expected him to say, and I was very upset and feeling a little sorry for myself because he hadn't offered to help. However, I finished the job, and the next morning the room looked quite good except for one big wrinkle on the wall. I was disappointed, but I did not know how to correct it.

Send a comment to the editors
NEXT IN THIS ISSUE
Testimony of Healing
Prayer restores peace at work; wound healed instantly 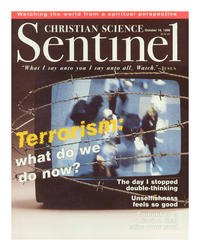