It's just over three years since Nelson Mandela was inaugurated as the first President of a truly democratic South Africa. During a visit last month to several cities, towns, and villages there, we asked two ministers—one black and one white—what role they felt God had played in what has proved to be an extraordinarily peaceful period of transition.

In Cry the Beloved Country, Alan Paton spoke of the green hills of KwaZulu-Natal as "grass-covered and rolling" and "lovely beyond any singing of it." On an autumn morning of predictable warmth, we walked those hills with Daniel Mtetwa, pastor of a Zion Apostolic church that stands alone in a field of coarse grass among canefields which, at this time of year, are eight feet high and ready for harvest. 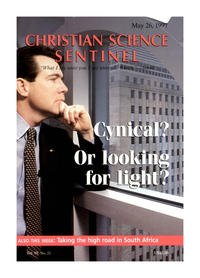