At peace with our lives

"I am at peace with my life and my work. I don't think I have any enemies." These are simple, yet profound, words of wisdom on the subject of dealing with fear. They're the words of Oseola McCarty, as she approaches her ninetieth year. You've probably heard of her. She's the washerwoman from Hattiesburg, Mississippi, who has lived alone for the past three decades and in 1995 donated $150,000 to the University of Southern Mississippi for a scholarship fund. That money came entirely from the very modest income she earned taking in laundry over the years, carefully putting aside a few dollars into savings whenever she could.

Oseola McCarty has since received numerous humanitarian awards for her unselfishness. She holds an honorary degree from Harvard University, even though her formal schooling ended when she was only eight. No other African American has had his or her portrait hanging on the walls of the University of Southern Mississippi until now.

Send a comment to the editors
NEXT IN THIS ISSUE
Testimony of Healing
A few years ago I was going through a very challenging time... 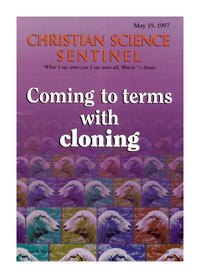