Many years ago, I was involved in an automobile accident that...

Many years ago, I was involved in an automobile accident that changed my whole life. The hospital ward in England that I was carried to in an unconscious state, was to be a place of spiritual enlightenment. The car I was in had been totally wrecked, and the driver did not survive the impact. Since this was in the days before seat belts, I had been thrown against the windshield, and this resulted in my unconscious state. Nonetheless, I did hear my mother's voice speaking to me and declaring that nothing had taken place and that I was all right.

I had no recollection of the accident at the time, but I instinctively knew prayer was required, and in the seeming blackness of oblivion I started to pray. When I eventually regained consciousness briefly, my parents told me that a Christian Science practitioner was praying for me, and asked me to hold to the thought in the lines from one of Mrs. Eddy's poems "Thus Truth engrounds me on the rock,/Upon Life's shore" (Poems, p. 12). I also had the Bible, Science and Health, and a pamphlet titled "God's Law of Adjustment" by Adam H. Dickey, on the side table. As I drifted in and out of consciousness the next few days, I finally reached in desperation for the pamphlet and started to read. 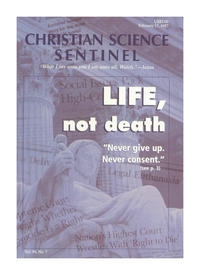