Innocence in the city

When eleven-year-old Elizabeth and her family moved to a major city, the journey to her new school involved a long subway ride. Her mother commuted with her morning and evening for the first three weeks, to familiarize them both with all the routes she could take. The rush-hour trains were crowded, so it was reasonable to assume that she was well protected. They practiced steps she could take if danger arose.

One day Elizabeth became aware that a man sitting diagonally opposite to her in the crowded subway train was trying to frighten, intimidate, and embarrass her. His covert movements were unseen by the other passengers, but his mocking grin, focused on her, alerted her to moral and physical danger. She was in turn surprised, shocked, and then indignant at his disgusting behavior. 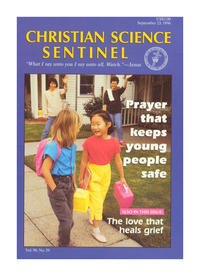