This week we meet Dean Furbush, a student of Christian Science who tells us that he is a dad, a tennis player, and an economist. What that list doesn't reveal is that he is chief economist of the National Association of Securities Dealers, which runs the Nasdaq stock market in the United States (one of the busiest stock markets in the world); that much of his success on the tennis court can be attributed to his doubles partner, his wife Helen; and that they are the parents of four children under eleven, which, Mr. Furbush says, keeps the dad part of his life action-packed.

"Economics is much more than the deficit, or the unemployment rate, or what interest rates are going to do next year or next month," says Dean Furbush. "To me, economics is a way of thinking about human behavior. It's like Christian Science. Both are based on predictable, firm principles. Yet, I'd make a clear distinction. The laws of economics reflect how people tend to behave, given certain incentives, whereas the laws of God that undergird the Science of the Christ aren't tendencies, they're bedrock. The laws of God don't rise and fall with the dollar or the deutsche mark!" 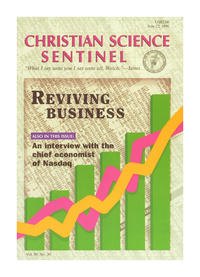