I grew up with the book Science and Health always in view. Mother had it within her reach, and she read from it daily. She told me how she first learned about Christian Science. I loved to hear how she frequently took the trolley car to and from work. One day, in the end-of-the-line waiting room, she saw a display inviting people to take the Christian Science magazines it held, and she helped herself to its contents. And what a help these magazines turned out to be! She later visited a Christian Science Reading Room, where she got her first copy of Science and Health and some other literature from the librarian. She soon found one could get help from Christian Science practitioners. Before my parents were married, my father was healed instantly after my mother called a practitioner to pray for him. A doctor had described my father's lungs as being like paper from severe influenza, and he hadn't been expected to live through the night. But he remained in good health for many more years.

When I was a child, my mother realized after I had been ill for three days that I had whooping cough. When she telephoned a practitioner to pray for me, I, too, was healed instantly. My mother later told me that my friends who had gotten whooping cough had been confined for three weeks.

Send a comment to the editors
NEXT IN THIS ISSUE
Testimony of Healing
Science and Health explains, "The way to extract error from... 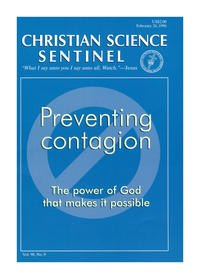