Dilemma? Take it right to God!

A friend of mine was on the middle school soccer team. One weekend the team traveled to an "away" tournament. The tournament was held in a large sports center. Between matches, he and another player went into the pro shop to have a look around. After they left, the other player lifted up his shirt to show my friend a pair of goalie gloves that he had taken from the shop. On the bus trip home, the teammate proudly showed them to others as well.

My friend goes to a Christian Science Sunday School. There, he had learned the Ten Commandments; and he knew well that taking something without paying for it breaks the commandment "Thou shalt not steal" (Ex. 20:15). He felt he knew what this meant as far as his own behavior went, but he wasn't sure what he should do in this situation. This person was the best player on the team, and my friend didn't want to ruin the whole team's record by getting this player into trouble, nor did he want to be considered by his teammates or the coaches as someone who tells on others. No matter how he looked at it, this seemed like a huge dilemma without a clear answer. 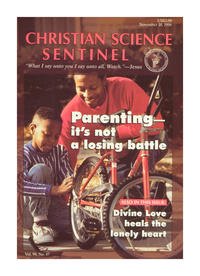