You are always safe

At the time of writing this article, the tragedy of TWA flight 800 is still being mentioned on radio and television and in newspapers. There is still speculation as to whether a malfunction of the aircraft or a terrorist activity was involved. Whatever may be to blame, the question remains as to whether there is a way to be assured of safety when traveling by air.

My wife and I, during the course of several years, have often traveled by air throughout the United States, the United Kingdom, Europe, and elsewhere. When making such a journey, we invariably have prayed to know God's protective power is in operation wherever we go—in fact, is everywhere. 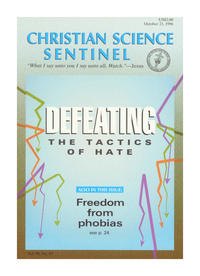