How can you pray about ethnic strife?

There are so many ways that you can pray about racial and ethnic intolerance, whether it's in Bosnia or Somalia of or Chechnya or the United States. And your prayers can bring such blessing—so instantly and to so many people. What's needed most is your caring and your commitment to the task. And your own certain knowledge of who you are as God's beloved, His child. Because it's who you are that gives you direct contact with omnipotence, with the one and only power governing the universe. In a word, with God.

You could, for instance, start off your peacekeeping efforts the way the citizens of Portland, Maine, in the United States did: by acknowledging that intolerance doesn't have to happen. In Portland, some five hundred men, women, and children staged a "No Place For Hate" rally outside the City Hall one day this past summer. The rally—sponsored by an "anti-bias" task force—amounted to a united public statement to show support for the steady stream of immigrants who've come to Portland from around the world. The task force, which includes some local church groups, wanted to send a clear message to the newcomers: You're not standing alone. The people of Portland are standing by you. They're not going to put up with intolerance. (See The Boston Globe, July 16, 1995.) 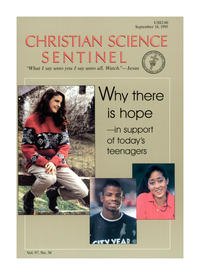