You've had a job interview and you think all went well. But you didn't get the job. And maybe the company didn't even give you the courtesy of a letter or a telephone call when someone else was hired. Not being notified when a job is filled is just one of the annoyances that can beset someone looking for employment. When the job advice column in a big city newspaper ran a letter objecting to this practice, it received more letters with the same complaint.

What can you do if you feel you have been treated like a second-class citizen when looking for a job? You could complain, but that may do more harm than good. Better than complaining is the prayer that helps you see both yourself and your prospective employer as spiritual ideas of God, reflecting His goodness, justice, and mercy.

When one is looking for a job, it helps to know that the one Mind, God, is governing all concerned. God is not at war with His ideas, His offspring, and His ideas are not at war with each other. God is the one and only creator; He is omnipotent and all-encompassing. He has no unemployed or underemployed ideas. Neither does He have any second-class ideas. The man of His making is not the child of rejection or misfortune but is always employed in the service of his Maker.

The promise of spiritual facts such as these is that God is in charge of His creation, governing it perfectly, even when things don't go as we think they should. In the book of Isaiah we have God's promise "Look unto me, and be ye saved, all the ends of the earth: for I am God, and there is none else. I have sworn by myself, the word is gone out of my mouth in righteousness, and shall not return, That unto me every knee shall bow, every tongue shall swear" (45:22, 23).

As we come to understand these truths, we realize that our future, and that of our families, don't rest on the outcome of a job interview. We know without doubt that God will give us—and is right now giving us—the spiritual ideas that provide for our human needs. We become certain that divine wisdom is placing us where we can serve God best.

The man of God's making is not the child of rejection or misfortune but is always employed in the service of his Maker.

With this understanding, an employer's rejection or insensitivity will no longer upset us, for our feeling of security will be rooted firmly in God, not in a person or a particular job. We will know that God is already employing us, that He is always present, and that we cannot be separated from the unlimited good He is always giving us.

One of the distinguishing characteristics of Christ Jesus was his absolute certainty that his true mission was to be about his Father's business—to reflect God's will in all that he did. And he knew this was our mission, too. Even the desertion of his disciples and the crucifixion by his enemies could not shake Jesus' confidence in God's goodness and allness.

Speaking of God's allness, Mary Baker Eddy writes in her book Unity of Good: "If He is All, He can have no consciousness of anything unlike Himself; because, if He is omnipresent, there can be nothing outside of Himself.

"Now this self-same God is our helper. He pities us. He has mercy upon us, and guides every event of our careers" (pp. 3-4).

A man who had been studying Christian Science for only a few years gained much comfort and encouragement from the idea that God guided every event in his career. He had felt that guidance, even though some of his occasional job interviews were less than satisfactory. One time in particular he could have felt discouraged, but he didn't.

He had answered an advertisement for a national advertising salesman for a well-known newspaper and had been interviewed by all the people with decisionmaking authority. At the conclusion of the interview, which he felt went very well, they said they would check his references and he would be hearing from them. As he left their office, he thought he had the job. He was not disappointed, though, when it turned out that none of his references were checked and that a good friend was given the job.

He never heard from the prospective employer, yet he was so certain that God governed every event of his career, he was perfectly satisfied to remain with his existing employment, even though it was providing only a meager income. He was so convinced of God's government that he knew without doubt that if that job was where he could serve God best, he would have had that job. And if it was not, he didn't want the job. Nothing could keep him from being where divine wisdom was leading.

As things worked out, his existing employment proved to be just right for him. His income soon exceeded what he would have made in the advertising sales job, and he was freer to pursue his goal of entering the full-time healing practice of Christian Science. He has no doubt that God was governing him without interruption throughout that period.

Such conviction comes only as we understand clearly that our true mission in life is to express God's nature and to love Him above all else. As we seek first and foremost to know and do His will, we will find His guidance more evident in our careers.

Without an understanding of God and our true, spiritual relation to Him as His child, we will be like those who build on sand. Christ Jesus said that when the rain and floods came, and the winds blew, the house built on the sand fell. Those who built on the rock, though, were secure. The rain, floods, and wind could not harm them (see Matt. 7:24-27).

The rock is Christ, Truth. Nothing can shake the confidence of those who trust fully in Jesus' teachings and in the power of Christ, which he demonstrated through his healing works. The sand represents the shifting uncertainties of human thinking, and it lacks stability because it is not anchored in eternal Truth or in the reality of God's love.

A loving God does not put us or leave us in an impossible situation. His Son, Christ Jesus, built his career on the clear certainty that God governed all in perfect harmony, without exception. Nothing could sway him from this truth. Thus, he didn't let the actions of others determine his thinking or undermine his understanding that God loved him and governed every event in his career. Neither the hatred and insensitivity of the Pharisees and other religious leaders nor the dullness of his disciples could lessen his conviction of God's power and goodness.

We can cultivate our own Christlike trust through a growing understanding of God's love and tender care. God's law can be fully relied on to govern our careers, and we'll find that the work we do has greater value to both ourselves and our fellowman as we approach it with the motive to serve Him alone. 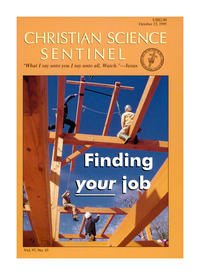